For this month’s Guitar Accelerator Song of the Month, we will look at a piece of moderate difficulty that uses lots of sweep picking.  What you will love about this piece is it sounds impressive on guitar and won’t take you long to learn.

A Quick Review of Alternate Picking

Here is an example of alternate picking: 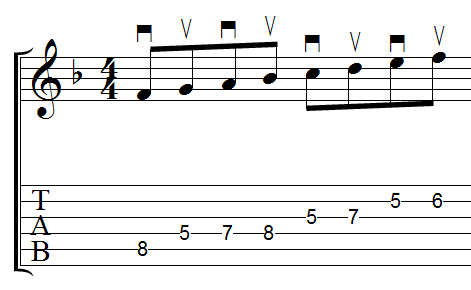 Alternate picking is a very effective and efficient way to play rapid scalar passages.  However, it can become tricky to use alternate picking in passages that switch over multiple strings.  This is especially true when you encounter a passage where there is only one note per string.  This is where sweep picking shines.

A Quick Review of Sweep Picking

In sweep-picking (aka economy picking) your goal is to use as many continuous up-strokes and or down-strokes as possible.

Here is what it looks like when playing an F major arpeggio with sweep picking:

If you are new to sweep-picking, check out this tutorial: Guitar Technique Tutorial: How to Sweep Pick.

Now that the basics have been reviewed, we are ready to jump into the song.

This month’s song is a piece called “Fisher’s Hornpipe”.  This piece is a good short technique piece.  It’s in two sections that each repeat.  This is called binary form.  The A section is 8 measures in length and the B section is also 8 measures long. So you will find that this piece won’t take very long to learn.

This piece is in fifth position.  If you are not familiar with how fret-hand fingerings are determined, check out my tutorial on fret-hand positions and fingerings: Four Finger Fingerings for Guitarists: How they Really Work.

Here is the fully printable PDF sheet music for Fisher’s Hornpipe in tab and standard notation.

Here’s a good tip to help you learn sweep picking…

When you first learn sweep picking, it is quite easy for your pick-hand to forget and fall back to the default alternate picking mode.  So practice in front of a mirror and periodically focus on watching your pick-hand in the mirror.

Have fun with Fisher’s Hornpipe! 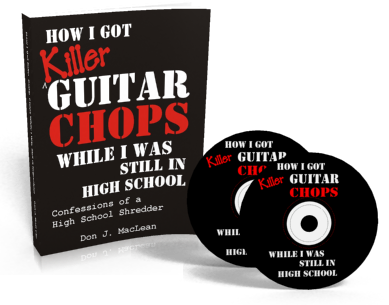 If you are looking for some great ways to improve your guitar technique and overall guitar playing, check out my complete guitar technique course called How I Got Killer Guitar Chops While I Was Still in High School: Confessions of a High School Shredder. It gives you 30 ready-to-use and fun Super-Chops Workouts.