How to Solo on Guitar 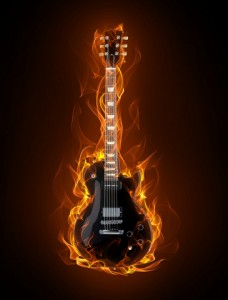 When you first start to play guitar, you want to sound just like your favourite guitar player.  But over time, you reach a point where you want your own guitar sound.  You want to create your own unique guitar style.

One of the biggest questions I get from guitar students is, “How do I get my own style?”

The good news is that every guitar player can develop his or her own unique guitar style or sound.  The bad news is it’s not easy and will take some time.

Now there are many steps in the process of becoming a unique and original guitar player.  What we will look at here are 5 tips for getting started on creating your own unique guitar style.

1.  You must imitate before you can originate.

This is the most common way that most guitar players learn guitar, and it really makes a lot of sense.

Learn them note for note.

Practice them until you can play them along with the recording.

After you’ve been playing for a while and have a good number of songs down note-for-note, you should start to listen to songs you like, and then work on imitating them very loosely.

So at this point, your objective is to get the gist of the song, and put your own take on it.  Yes, you will still want to learn songs note for note, but by learning songs and starting to change them around a bit, you will be on your way to creating your own guitar style.

2.  Master the concept of tension and release.

This is a really big and important concept.

So this means that creating a guitar solo is simply a game you play with tension and release.

The more control you have over this, the better your guitar solos will sound.  How you do this establishes your sound.

3. Begin with a less is more approach.

After most guitarists get their first few scale fingerings down, they begin to improvise guitar solos. More often than not, first attempts at guitar solos sound like musical diarrhea.

The best approach at first is to limit the number of notes you play in a guitar solo.

Here’s what you do: start by playing only one note.

That’s right, just one note for the entire guitar solo.  Start with a simple chord progression like:

Simply play one note from the C major scale (C-D-E-F-G-A-B) over the entire progression.

This will force you to really hear the sound of that one note over each chord.  You will hear how one note can sound beautiful over one chord and then sound quite dissonant over another.  This is part of the learning process.  Over time, you will want to catalogue these sounds.  This will allow you to start to build your personal guitar solo toolkit.  You will learn what notes work best against each chord. Again, it’s a tension and release thing.

The next step is to pick a different note and repeat this process.

4. Focus on rhythm and timbre.

In addition to starting to hear what each note sounds like against the chords, you should also begin to have some fun with rhythm.  When you can only play one note for an entire guitar solo, you have to do something of rhythmic interest.  So experiment by playing the note with different rhythm patterns.

The next aspect to look at is timbre (pronounced tam’ -ber).  This refers to the quality of sound.  Again, when you are only playing one note, you will need to do something different to create interest.  Look at different ways of attacking the note.  Slide into the note, use vibrato, pinch harmonics, pluck the note, use only up-strokes, use only down-strokes, use alternate picking, etc.

Once you’ve done this exercise with different notes, repeat the process with two notes.  Now you will work on creating a guitar solo using only two notes for the entire guitar solo.

Then repeat the process with three notes, then four notes, etc.

This is very simple but powerful exercise that will really get you on your way to understanding how to create your own guitar solos and in the process begin to establish your unique guitar sound and style.

There are many benefits to doing this exercise.  After you’ve finished the exercise and allow yourself to create a guitar solo with as many notes as you want, you will find that you will appreciate the musical freedom that much more.  Most importantly though, after this exercise, you will find yourself being more economical with your note choice.  You will start to make every note in your guitar solo count.

Now instead of having to guess which notes will work best with each chord, there is a short cut…

You’ll find that learning the basics of guitar music theory will save you way more time than it takes to learn.

Once you understand the basics of music theory, you will understand the notes that are found in each chord and scale.  This will allow you to take your guitar solos to a much higher level.  You’ll be able to develop your unique guitar style further.  When you understand how to apply music theory to the guitar, you will be able to create guitar solos with chord-scale relationships in mind.  This means you’ll have better control and you’ll find improvisation to be easy and tons of fun.

Now of course you don’t have to learn guitar music theory.  Many good guitar players can’t even tell you what notes they’re playing.  What you should keep in mind is that self-taught-by-ear guitar players usually take the long route to mastering the guitar.  They can be good players, but it usually takes them a really long time to get there.

If you learn to play guitar on your own, you only get to learn from the person facing you in the mirror each morning.  If you decide to get some help from an expert, you get to learn what has worked for the best musicians over the last several hundred years.

In other words, you don’t have to reinvent the wheel.

So why learn by trial and error when you can cut your guitar learning curve at least in half.

Oh yeah, the other great thing about learning guitar theory is you can also turn it off at any time, so no, you don’t have to worry that it will cramp your style, or hurt your creativity–in fact, it’s actually the opposite.