Learning guitar chords can sometimes be more confusing than it needs to be. One of the major reasons for guitar chord confusion is simply due to the lack of standardization in chord symbols.  There can be many, many different ways for the same chord to be symbolized.

In a previous tutorial we covered the basics of chord symbolization.  In case you missed it, here is the link:

In this tutorial, we will look at the difference between the major 7th chord and the dominant 7th chord. We will also look at how to play them on guitar.

Here is the formula for the major 7th chord:

This means if we take the first, third, fifth and seventh notes from the major scale, and we will have the notes needed for a major 7th chord.  If we start with the C major scale here is what we get:

So, if we take out 1-3-5-7, we get the notes: C-E-G-B.  If we play these four notes in any combination on the fretboard we will have a C major 7th chord.  You can also double one or more chord tones.

For the next example, let’s say we want to build a Bb major 7th chord.

Therefore the notes in a Bb major 7th chord are Bb-D-F-A.

To build a dominant 7th chord we need to extract 1-3-5-7 from the major scale, but this time we need to lower the 7th degree by a semitone.  This is reflected in the formula as:

Therefore the notes in a Bb dominant 7th chord are Bb-D-F-Ab.

Here is a common voicing for Bb dominant 7th.

What’s in a Name?

At the start of this tutorial I hinted at the confusion that sometimes arises because there are so many different ways a chord can be symbolized.

Well, the major 7th and dominant 7th chords are certainly no exception.  There are many ways these chords are symbolized—but that’s beyond the scope of this short tutorial. The most important thing you need to know is that the dominant 7th chord is usually just referred to as a 7th.  So for example C7, F7 and G7 would all be examples of dominant 7th chords.  If a guitarist wants to refer to a different type of 7th chord, then some sort of qualifier needs to be added such as major 7th, minor 7th etc. 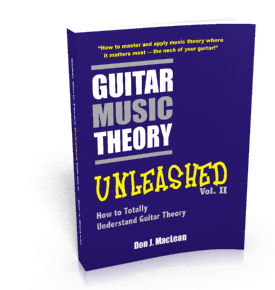 Are you ready to take your guitar playing to the next level and learn more about the 17 different types of four-part chords?  In Guitar Music Theory Unleashed, you will discover how all of the 7th chords work and you’ll also learn what you need to know about chord progressions.  Learn more…