In today’s tutorial, we will look at a quick and easy guitar arrangement for the popular Christmas song “The Holy and the Ivy”.

The arrangement we will look at uses just three chords.

What are the Chords for the Holly and the Ivy?

The chords you will need to know for this arrangement are G, C and D major chords.

Here are some guitar neck diagrams for G, C and D major. 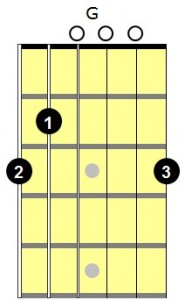 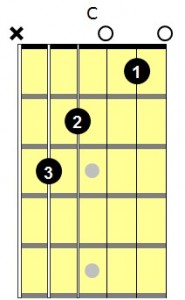 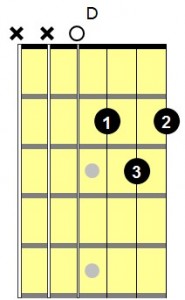 The circled numbers indicate fret-hand fingers that you need to use.

In the guitar chord diagrams shown above, an “x” on a string means that you don’t play that string.

An “o” on a string means you play the string open. An open string is a string that is played with no fret-hand fingers on it.

“The Holly and the Ivy” is in ¾ time. This means that the melody and accompaniment for this song are in triple meter.

In triple meter, there are 3 beats per measure. The first beat is strong, while the second and third are weak.

This is what you characteristically hear when you listen to a waltz or polka. The umm, pa, pa, is strong, weak, weak.

So the way to strum along with this song is to make the first beat stronger than the rest.

Now do understand that there are many different ways you can accompany a song. The recommended accompaniment pattern for you to use with this song is very simple. All you do is use a down-stroke on each beat.

To perform a down-stroke, simply strum from the thickest strings in the chord to the thinnest. An up-stroke would be performed the opposite way.

How Do You Know When to Change Chords?

In sheet music, chords are usually only indicated at the very start of the song and then just where they change, or where they are needed for clarity.

This is done so the music remains as uncluttered and clear as possible.

In the above example, you play the G major chord for the first 3 measures.  In measure 4, you play a D major chord.

In sheet music, the guitar chord voicings are set so they line up with the lyrics as well as the beat(s) on which they occur.

Here is a fully printable PDF guitar tab arrangement of “The Holly and the Ivy”. I’ve also included full lyrics.

If you are looking for additional easy-to-play 3 chord guitar tab Christmas songs, check out 15 Easy Christmas Favourites for Guitar with Only 3 Chords. 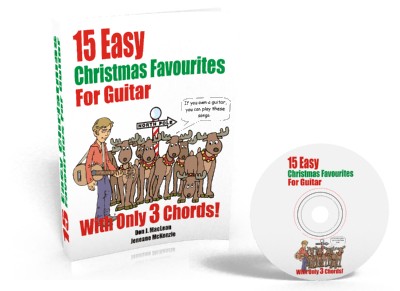