Before we examine how to play guitar scales, we need to first look at how to read guitar scale diagrams.

Numbers found on the left side of the grid indicate specific frets.  If there are no numbers beside a grid, assume that it represents the first five frets. 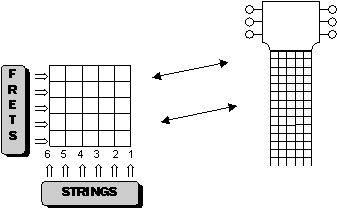 In some situations you will find it necessary to have one finger play the notes on two frets.  Instead of shifting your whole hand up or down one fret, it is most practical to leave your hand in one position and have one finger cover the notes on two frets.  The finger that will do the stretching will either be your first finger or your fourth finger.  Occasionally you will encounter circumstances that will require a double stretch with your first and fourth fingers. 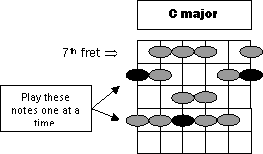 Scales are usually practiced from the lowest-pitched-note to the highest.  If the above scale form is positioned so that the first finger is on the 7th fret, you would have a C major scale.  Here is how you would play the C major scale.