Today we are going to look at a frequently overlooked way to learn new guitar chords.

When you sit down to learn a new guitar chord, you don’t have to start from scratch.

Once you know a few guitar chords, you can use this simple but effective technique.

Ask yourself this important question:

If the answer is yes,  then learning the new guitar chord will be much easier because you are linking the new chord with something you already know.

Let’s look at some examples…

Take a look at the E major and A minor chords shown below:

As you can see, E major and A minor both use identical fingers.  Fingers 2-3-1 are found on strings 5-4-3 in the E major chord.  In the A minor chord, fingers 2-3-1 are simply shifted down one string each to strings 4-3-2.  In other words, the exact same shape is used but it is used on different strings.  The sixth string is played in E major but is not included in the voicing for A minor.

So if you were going to learn E major and already know how to play A minor you can see how it will be as easy as shifting your fingers for the A minor chord to the E major chord and vice versa.

Now look at the F major and Ab major chords that follow: 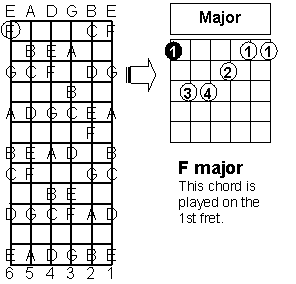 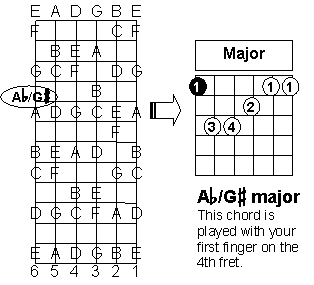 As you can see, both of these chord fingerings are identical except that they are played on different frets.

Now look at the difference between E major and E minor.  Notice that the only difference is that you take the first finger off of the E major chord to produce E minor.

The great news here is that as you learn more chords it will become easier and easier to add new chords to your vocabulary.

What do you do if the new guitar chord does not use identical or similar fingerings?

That we will look at shortly. 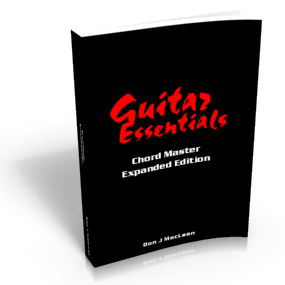