It’s time to get into a bit more detail in reading and playing guitar tab or tablature.

First we will start with a diagram and translate this onto the neck of the guitar. 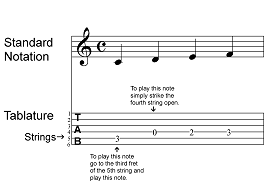 Here are some fretboard diagrams showing you how to play the first four notes shown in the tab shown above.

The first note is played by placing your third finger on the third fret of the fifth string.  Remember that the strings are numbered from the the thinnest (1) to the thickest (6).

The next note is played by simply playing the fourth string open.  This means you play the string without any fingers on it.

The final note is played by going to the third fret of the fourth string and playing this note.  Use your third finger to play this note.

How’s that for quick and easy?  We will talk more about picking in a later lesson, but for now just use a down-stroke for each note.